Homepage > Witches In Egypt And Walthamstow

Witches In Egypt And Walthamstow

Witches In Egypt and Walthamstow

What witches are accused of, despite a plethora of literature on the subject, remains obscure. Most practitioners of witchcraft associate themselves loosely, or otherwise, with healing. Consequently, poison`s a concern of theirs, which makes of the Bible prohibition against `witchery` something of a paradox, `You shall not suffer a witch to live.` (Ex: 22. 18) The prohibition appears during the period of the Jews` escape from slavery to the Egyptian Pharaoh, Rameses II, that is, a place where the serpent was worshipped, because the state maintained its power through governmental poisoners, `Each one threw down his staff and it became a snake.` (Ex: 7. 12) Some interpreters have seen `poisoner` and `witch` as interchangeable terms,  whereas most witches asseverate their healing virtues, and point to the teaching of Jesus in the New Testament of the Bible, that is, a healer, as vindication for their use of `simples` in healing medicaments. 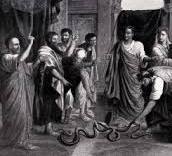 The argument would seem to be that the Jewish Messiah, Jesus `Christ`, `the chosen`, healed by the power of his spirit alone, although that isn`t biblically true, `He put mud on my eyes, then I washed, and now I can see.` (John: 9. 15) Jesus used a preparation, and the Jewish religious police, the Pharisees, accused him, `This man is not from God.` In other words, they accused him of witchery, although poisoning is identified in the Old Testament of the  Bible, that is, the law and history of its `chosen people`, the Jews, which is their Torah and Talmud, as the activity of witches. In other words, Jesus is a healer accused of being a witch, which is equally true of many modern herbalists. As Jesus was tortured to death on the accusation of the Pharisees, so Christianity mistakenly assumes that it`s empowered to accuse and torture women who practice herbalism. In simple terms, Christians view Jesus` being nailed to a cross as a `dissident` and murdered by the Empire of Rome then occupying Jewish Palestine as legitimizing human sacrifice, `So Christ was sacrificed once to take away the sins of many; and he will appear a second time, not to bear sin, but to bring salvation to those who are waiting for him.` (Heb: 9. 28) Because the focus of Judeo-Christianity is on Jesus` self-sacrifice, which it wasn`t, the Pharisees and the Romans killed him, it`s impossible to understand how Jesus` death, resurrection and ascension to heaven redeemed humanity; unless Jesus` birth from his mother, the Virgin Mary, uncontaminated by male semen is considered a factor of importance. In Christian iconography, Mary is depicted crushing the head of the serpent with her foot, because the angel, Satan, who rejected God`s plan that the human host be greater than the angelic, was turned into a serpent by God as a punishment for being poisonous towards humanity. 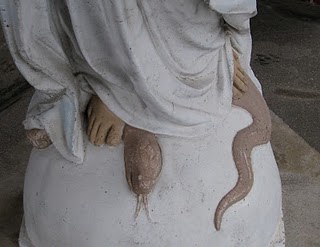 According to the Bible the angels of God dwell in heaven with God, but Satan was placed in the paradise of heaven on Earth that was Eden where Eve, the first woman created by God, was tempted by the serpent, Satan, to `eat of the fruit of the tree of the knowledge of good and evil`, that is, death, `You shall be as gods.` (Gen: 3. 5)  Eve and the first man, Adam, were expelled from Eden by God for rejecting the `fruit of the tree of life`, which was immortality, but God told Eve her `seed` would prevail, `You shall crush the head of the serpent with your foot, but he will bruise your heel.` (Gen: 3. 15) Eve was created by God from the side or rib of Adam, which is a euphemism for birth from a futanarian self-fertilizing human, that is, despite God`s prohibition against human sacrifice, Jesus, `the Second Adam`, is depicted as a self-sacrificer, because the first Adam was a self-fertilizer. In short, Christianity is based on a false symmetry whereby the self-fertilizing species of `woman`s seed` is depicted as self-sacrificing itself as a pubnishment upon itself for its sinful nature, which redeems. However, if the perspective is ignored of supposedly animal humanity being tortured to death for its sins, the figure of Satan as a host womb slaver of the futanarian species of `woman`s seed` can be examined. 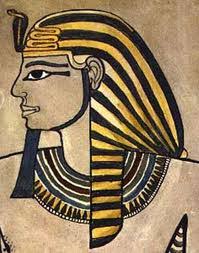 Prehistorically, saurians dominated the Earth 248 m.a., in the Mesozoic period, whereas hominids only began to appear 220 m.a., in the Jurassic period, which left 20 million years for saurian evolution to develop into host womb slaving of the hominids, which is what the biblical narrative of Eve and Adam represents. In other words, Satan was a saurian and Eve and Adam were the human futanarian species of `woman`s seed` representing a food resource. Consequently, the Bible depiction of the self-fertilizing futanarian Adam, bearing the woman, Eve, has been falsely translated through Jesus` New Testament as a form of animal husbandry, whereby the self-fertilizing human race is `sacrificed`, that is, butchered, to appease the torturer. Or, to put it another way, the saurian has learned to play with its food, and Christianity has sanctioned it, despite Jesus` appeal to allow `woman`s seed` to reproduce human brainpower to lift the race to colonize the planets among the stars, `Love your neighbor as you love yourself.` (Mk: 12. 31) 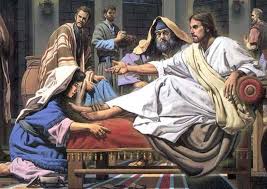 When Jesus` foot was being anointed by a woman with the expensive perfume, spikenard, his disciple Judas` spy canard was that the perfume should be sold to raise money, but Jesus demurred: `Leave her alone.` (Mk: 14. 6) Judas` response was to accept `thirty pieces of silver` from the Jewish religious police, the Pharisees, who gave Jesus to the Romans, who then crucified him, because Judas didn`t want Jesus` `woman`s seed` to reproduce as that would interfere with the host womb slavery of the human futanarian species of `woman`s seed` by the `serpent`s seed` of Satan, that is, unredeemed men. In short, redemption is Jesus` resurrection and ascension to heaven in prefiguration of that of `woman`s seed`, because Mary and Jesus` `seed` represent the better brainpower of the human futanarian race of `woman`s seed` opposed to that of the serpent`s.

Although Judeo-Christianity has been taught purity and adultery as the basis of morality, intelligence is the sine qua non of humanity, so Jesus` teaching of redemption applies to all who accept `woman`s seed`, because the Bible equates `woman`s seed` with God`s goodness, which is the `fruit of the tree of life`, that is, the producing of human brains by `woman`s seed` to re-confer immortality upon her species through advanced medical science`s capacity to rejuvenate. As the contaminant of the human race is the `serpent`s seed`, so women can`t be accused of immorality because of adultery. They`re a single species, which doesn`t naturally marry a slave ring, and Jesus points that out: `At the resurrection people will neither marry nor be given in marriage; they will be like the angels in heaven.` (Matt: 22. 30) That doesn`t mean that the human host will be identical with the angelic, but that `woman`s seed` will carry herself to colonize the planets among the stars where she`ll reproduce as a single race free of ring slavery.  The concept of adultery is relevant to human intelligence insofar as `woman`s seed` has been adulterated, although intelligence per se is identifiably associated with God`s goodness, because men of the `serpent`s seed` are redeemed if they accept `woman`s seed`, that is, freedom in peace for humanity, which is what human intelligence off Earth would want from the colonized planets among the stars of heaven above.