The Roman guard, Longinus, at the crucifixion of Jesus Christ said upon the death of the Jewish Messiah: `Surely, this was the son of God.` (Matt: 27. 54) Jesus had been taken to the hill of Calvary outside the city of Jerusalem by the Romans and nailed to a cross of wood there where he was left until he died for his dissident teaching against the Empire of Rome then occupying Jewish Palestine with its legions: `Love your neighbor as you love yourself.` (Mk: 12. 31) After Jesus` death Longinus thrust his spear into Jesus` side because Jesus had said that a Holy Spirit would teach after him. Called the `Second Adam` after the first man, Adam, from whose side the first woman, Eve, emerged, Longinus` perception was that the Holy Spirit was the `Second Eve`, that is, the wisdom of woman gleaned by her spirit since the paradise of Eden where God created Eve and Adam, who would emerge from Jesus` side if he performed what the modern gynecologists call a `caesarian section` to facilitate a difficult birth for a woman in labor. God had told Eve in the heaven on Earth that was Eden that she and Adam would have Redemption despite eating of the `fruit of the tree of knowledge of good and evil`, that is, death, given to them by the angel, Satan, who`d been turned into a serpent and left in Eden for rejecting God`s plan that the human host would be greater than the angelic: `You shall crush the head of the serpent with your foot but he shall bruise your heel.` (Gen: 3. 15) In Christian iconography Jesus` mother, the Virgin Mary, is depicted crushing the head of the serpent with her foot, because Jesus born uncontaminated by male semen is futanarian `woman`s seed`, who are capable of sexually reproducing as the species of women with their own penis` `seed`. Although God expelled Eve and Adam from Eden for rejecting God`s `fruit of the tree of life`, that is, immortality, God told Adam he must labor, and Eve would experience labor pain, but Redemption would occur. Consequently, Longinus` cutting open Jesus` side after his death was a `caesarian section` facilitating the birth of the futanarian Holy Spirit of `woman`s seed`. To the minds of women able to understand, the Roman Empire was preventing Jews from producing human brainpower. 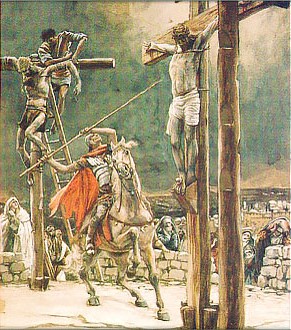 Although Longinus proclaimed Jesus the son of God, Jesus called himself the son of man, because for Jesus his mother, the Virgin Mary, was man, whereas the Roman legions weren`t human. Encountering a man beside the town of Gaderene, the man told him, `My name is legion.` He was possessed of demons and Jesus told the demons to leave the man. The demons left the man and went into a herd of pigs that ran off a cliff and drowned, because that`s what the Roman legions were for from man`s point of view. The man Jesus met didn`t want to belong to the legions of Rome, and so Jesus saved him, because he was redeemable from his sinful nature, which is that of a parasite. In Eden the serpent told Eve and Adam: `You shall be as gods.` (Gen: 3. 5) Because humans in ephemerality are blind unconscious ignorance without permanent knowledge through the wisdom gained of immortality, they`re slaves to the parasite that keeps them ephemeral. Consequently, Eve and Adam were being offered power through acceptance of the parasite in parasitism and ephemerality for the human race in blind unconscious ignorance. In short, Redemption from sin is rejection of parasitism and acceptance of `woman`s seed`, because women`s mode of sexual reproduction represent human brainpower for the conferring of immortality through medical science and the development of freedom conferring labor saving devices. Upon his death Jesus had Resurrection and Ascension to heaven in prefiguration of that of `woman`s seed` because human brainpower will take her to colonize the planets amongst the stars through starships of her own making. Satanists interpret `son of man` and `son of God` as `snuff man` and `snuff God`, and Christianity is encouraged to help them on `moral grounds`. Snuff is the generic term for movies made of real killings to entertain audiences. Although it became widely known as an evil film genre in the 20th century, the Greco-Roman Empire`s building of amphitheaters in which people were killed for entertainment was an early version of `the snuff man` theme.

In male braining the Romans manufactured a transvestite `TV` creature wearing each others` clothes to die for them as entertainment in the amphitheater of the Earth, while the `TV` machine transmitting such entertainments directly into people`s homes wasn`t invented until 1926 by John Logie Baird, and men were able to do this because women`s mode of human sexual reproduction had been banned on `moral grounds` by supposed Christians; for example, the `Hays code` (1930) established by President Will Hays of the Motion Picture Producers and Distributors of America (MPPDA) effectively forbade women, and therefore humans, from being seen engaged in sexual activity, which would have educated people and women in the importance of futanarian `woman`s seed` through mainstream mass media entertainment: `... women, in love scenes, at all times have `at least one foot on the floor` (in other words, no love scenes in bed).`1 Although men represent themselves as human, Nazis were Christians, and men`s history is that of an alien parasitoid devourer, where `parasitoid` is definable as a parasite upon a host that emerges to devour the host: `And the dragon was wroth with the woman and went to make war upon the remnant of her seed.` (Rev: 12. 17) The notion of the serpent grown into a `red dragon` devouring the human host is central to the Bible and the flames of the Nazi Christian ovens at Belsen and elsewhere that consumed the bodies of the dead Jews corresponded to the dragon`s maw. The Germans took the fasces symbol of the Roman Empire from elected fascist dictator in Rome, Benito Mussolini, before Chancellor Adolf Hitler was elected fascist dictator in Germany and began the pogroms of the National Socialist (Nazi) Party against the Jewish `chosen people` of Jesus. The fasces is a bundle of wood with an axe at the center which the Romans used as a planner`s symbol, that is, planners were surrounded by a blind made of cut wood so that they were undisturbed. The fascists built `death camps` to conceal what they were doing, because the Greco-Roman amphitheaters were entertaining, whereas the `Nazi` pogroms weren`t. In short, the Nazis exterminated the Jews because they didn`t want entertainment.

Fascism is interpretable as secret entertainment, where `secret` is equivalent to `cigarette`, because `smoking` is a euphemism for murder, and fellatio, that is, the Nazi secret pogroms smoked the human species` penis of `woman`s seed` as a cigarette, which is what cigarettes represent. Consequently, ground tobacco is `snuff`, because Nazi Christians encouraged people to smoke the `chosen people` of the Jews on `moral grounds`, that is, women are visually desirable to their own species, whereas the alien parasitoid devourer wants to extinguish them. The ancient Greco-Roman amphitheaters were called `circus`, which is a euphemism for spy rings, because the smokers don`t want the people to know that they extinguish the human species` brainpower represented by the capacity of `woman`s seed` to sexually reproduce. In simple terms, humans are accused by the aliens of being spies because the aliens are exterminating the humans, and the humans might see. The fasces is a symbol in the US House of Representatives on Capitol hill in Washington, D.C., at the center of supposed Western democracy, although the capacity of `woman`s seed` to sexually reproduce and enfranchise themselves as voters far outweighs that of men who can`t sexually reproduce with each other, which is why the fasces is a symbol of US democracy. If the woman`s penis is removed by the aliens, the people will be blind, and magazines like Playboy featuring penisless women will continue to be viewed by the enslaved unconsciously ignorant ephemeral populace as epitomizing human desire, whereas they represent Nazism`s smoked penis and human brain.

Although Judeo-Christianity deems the Moslems in Islam traditionally as opposed to their religion, Judaism was founded by Abraham`s son, Isaac, born of his mother, Sara, who barren thereafter gave her maid, Hajer, to Abraham, and Hajer bore Ishmael, who was the founder of Islam through his descendant, Mohamed, who received the Koran (610-30 C.E.) from the angels of God, who`d been told that the human host was to be greater than the angelic. Consequently, although Islam is represented as legitimizing the birth of Ishmael from the unmarried Hajer, by permitting Moslem marriages four wives, Islam affords the possibility of futanarian sexual reproduction between women within the Moslem family, which is a potential for the fulfilment of the Judeo-Christian tradition despite the predominance of misogynist religious and secular dictatorship in Islam. Consequently, the conflict between Judeo-Christianity and Islam is an aspect of the alien parasitoid devourer. When the terrorist group Al Qaeda hijacked civil airliners on September 11, 2001, and crashed them into the Twin Towers of the World Trade Centre in New York city, it was a reestablishing of `rough trade`, that is, that `brutality and violence` associated with homosexuality in pederasty for war, which institutionalization by the ancient Greeks, along with host womb slavery of women, was held to be the `model` for Western democracy. In short, 9/11 resulted from men`s desire that the human race remain enslaved and blindly unconscious in ignorance while its irredeemably sinful parasitoid alien nature killed her. Jesus wasn`t, as the Roman death camp guard, Longinus, said, `the son of God`, but a `snuff god`, because that`s fascism.