A look at the world map without preconceptions derived from the global mass media`s descriptions of what and where it all is, reveals discrepancies; for example, the continent of Europe and Asia isn`t a geographical but a racial divide. Europe stretches from the port of Cadiz in Spain to the port of Shanghai in China, and although India is described as a subcontinent of Asia, it`s firmly attached to Europe. Consequently, the distinction between white Western Europeans, and yellow Asians with slant eyes, has produced a racial division, which isn`t based on geography, that is, Asia is a racist figment of the imagination. Because Australia was settled by White Europeans, like the Americas, which experienced the same period of bloody conquest, it`s largely ignored that Australia is a continent that sits more or less exactly where the continent of Asia would be expected to be, that is, surrounded by the relatively smaller land masses of the islands of New Zealand, Indonesia, Japan, the Philippines, Papua New Guinea, the Solomons, Fiji, Malaysia, and Taiwan.

Because the White Europeans distinguish themselves from the slant eyed Europeans, the Eastern Europeans are identified as `Asian`, whereas Asia more properly is centred upon Australia, where the indigenous inhabitants, the black Aborigines, were pogromed by the white European settlers who, coming mainly from England as `transportees`, were often those framed and convicted of small crimes, and who`d been forced to emigrate, rather than experience the often summary punishment of execution, so that Australia would be colonized. Consequently, the white settlers weren`t educated people and saw the indigenous aboriginal inhabitants as animals to be exterminated. Although the concept of the continent of Oceania is largely in the mind, Oceania more closely corresponds to a real continent than Asia, which is a racial divide, rather than a geographical division. Africa of course is a continent although it`s tied to the Middle East through Egypt and the Suez canal. Consequently, Saudi Arabia and the countries of the Middle East, which include Israel, Iran, Iraq, and Syria are thought of as Africa, whereas they`re European nations, because the white Europeans have convinced everyone to believe that China`s East Europeans are Asians, whereas Asia and the Middle East, properly considered, are Europe.

The genuinely curious fact about the world is North and South America, which is depicted as a single continent joined by the Panama canal, whereas in fact it`s two continents loosely described as America, North and South. The very big country is Russia, to the right of the map of what used to be thought of as Western Europe, which is a giant in comparison and has China tucked underneath it. For generations, the Western European white men have convinced the Earth that Western Europe is half of Europe, whereas what people have been taught to think of as Western Europe bears about the same relation to Eastern Europe as England does to France. Where Eastern Europe stops the coast of the United States of America begins, and in fact Russia is so big that it could afford to give the USA Alaska, which in fact is a part of Western Canada that the Russians decided they didn`t need.

Although North America, comprising the USA and Canada, is a continent along with South America for most people, Greenland is to the East of North and South America, and is at least as big as either North or South America, that is, if North America is accepted as being distinct from the South, Greenland is East America, that is, North, South and East America constitutes a single geo-political bloc, which isn`t race specific, and if aligned would constitute a country about the size of the European giant, Russia, whereas Western Europe`s white men`s racism has left them with something of a psychological complex with regard to a continent of Europe which they see as unpleasantly containing lots of slant eyed yellow people, rather after the fashion of the English queen Elizabeth II`s Greek husband, Prince Philip, who in China in 1986 infamously remarked to a group of British students: `If you stay here much longer, you'll all be slitty-eyed.`1 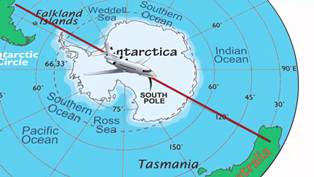 Although the continent of Antarctica is largely ignored on standard cartography depictions of the Earth, it`s a continent midway between the tip of South America, where the Falkland Islands are, and Australia.  The British government fought hard to keep the Falklands under British sovereignty when it sent a carrier task force to retake the islands in 1982 after invasion by Argentina, because of the proximity of the Falklands to Antarctica, which it had also lain claims of sovereignty to, reputedly because of its untapped oil and mineral wealth. Consequently, the continental land masses of the Earth are Europe, Africa, Australia, America, and Antarctica. Asia is largely a fiction constructed by racists to explain the difference between caucasian Europeans and Eastern Europeans, whose eyes are different; probably because life in colder climates pinches the features.

The absence of a continent from the Earth was documented by Plato, the Greek historian. In Timaeus (360 B.C.) Plato wrote of Atlantis, which was swallowed beneath the Atlantic ocean, between the East coast of North America, where New York city is, and the coast of Africa, where the Western Sahara desert is. Although it seems bizarre, the hole is just about the right size, and big enough, to put China, Mongolia, the so-called Indian subcontinent, and the Korean peninsula into, which would suggest that Asia was Atlantis. Except that it`s science fiction to suppose that Atlantis could, at some point in the past, have been relocated from the Atlantic ocean, and joined onto the continent of Eastern Europe.

A North, South, East and West continent of America would doubtless have been strong enough to withstand invasion by the Western Europeans. If the supposed sunken continent of Atlantis had remained where Plato`s Timaeus places it; instead of its being grafted onto the seaboard of Eastern Europe. Such an Atlantis would have been rendered harmless. Close to a white Western European colony of Australia in a future dependent on colonization of North and South America by white Western Europeans, a relocated Atlantis comprising China, Mongolia, the so-called Indian subcontinent, and the Korean peninsula, would have ensured the supremacy of the white Western European colonials over the indigenous inhabitants of America and Australia, which geo-politically is probably why Atlantis is depicted as having disappeared in Plato`s Timaeus, whether it was relocated to Eastern Europe`s seaboard or not.