Much has been made in recent years of the movie franchise, Planet of The Apes, which derived its power largely from French science fiction writer, Pierre Boulle’s 1963 novel, La Planète Des Singes, which described a future in which apes have become the dominant life form among humans of the planet Earth because earlier generations of humanity had destroyed their civilization with nuclear and biological weapons: 'In one of the countless billions of galaxies in the universe lies a medium-sized star, and one of its satellites, a green and insignificant planet, is now dead.'1 The scenario is relevant because the simian SIV1 virus mutation discovered by DR Congo in 1983 was spread by men mixing blood, shit and semen in each other’s anus. The human version of the virus strain was HIV, that is, the human immune-deficiency virus, which resulted in acquired immune deficiency syndrome (AIDS). The AIDS virus was an ‘incurable killer disease’ that rose from the base of the spine to kill the brain; effectively decapitating the victim. Consequently, it was a nape virus in the sense that its teleology was to reduce the human race to a nape without a brain above the neck, which is what apes were thought to be. In other words, the virus’ aim was to reduce the human race to simian levels through homosexuality. 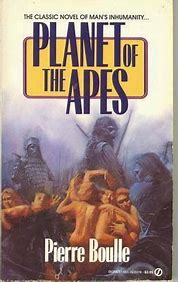 Although ‘the rape of Kuwait’ was a largely pejorative term during the period (1990-1) in which the army of President Saddam Hussein of Iraq held sway before the US and its allies removed it, the curious historical circumstances relating to the Moslem women of Islam in the Middle East and elsewhere has relevance for correlating rape with AIDS. In Judeo-Christianity Abraham’s son, Isaac, born from his wife, Sara, founded Judaism and, barren thereafter, Sara gave her maid, Hajer, to Abraham, and she bore Ishmael, who was the founder of Islam through his descendant, the Prophet Mohamed, who received the Koran (610-30 C.E.), according to tradition, from God’s angels, which permitted four wives to the Moslem peoples of Islam. Although Judeo-Christianity views the four wives of Islam as a retroactive attempt to legitimize the birth of Ishmael, the Islamic family affords the possibility of sexual reproduction for the human futanarian species of ‘woman’s seed`, that is, women as an independent species’ family with their own penis’ semen and their own host wombs. During the Bosnian war (1992-5), rape camps were set up by Christian Serb militia to male brain a generation of futanarian Moslems. Although Christianity is based on the teaching of the Jewish Messiah, Jesus ‘Christ`, his Resurrection and Ascension to heaven after crucifixion and death prefigures that of ‘woman’s seed`, whereas Judeo-Christian monogamy preaches ring slavery for host womb parasitism upon women’s wombs by a malien. 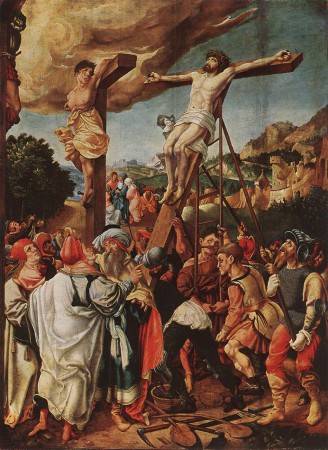 Accused of dissidency, that is, spying on the Empire of Rome then occupying Jewish Palestine, Jesus was taken to the hill of Calvary outside the city of Jerusalem where he was nailed to a cross of wood and left there to die despite his teaching, ‘Love your neighbor as you love yourself.’ (Mk: 12. 31) He’d been caught with a woman by his disciple, Judas, who’d suggested that the ‘perfume’ be sold to raise money, and Jesus had rebuked him: `Leave her alone.’ (Mk: 14. 6) Judas had sold Jesus to the Jewish Pharisees, that is, the religious police, who’d given the Messiah over to the Romans for execution as a dissident. Born uncontaminated by male semen from his mother, the Virgin Mary, Jesus prefigured birth from ‘woman’s seed`, and so he was the ‘son of man’ preparing to leave Earth for heaven through human brainpower, whereas men’s slave Empires wanted to maintain their hold: ‘You shall crush the head of the serpent with your foot, but he will bruise your heel.’ (Gen: 3. 15) The serpent is become a dragon in Jesus’ disciple John’s apocalyptic Revelation of the future, although it’s evident that its seed is men’s wars: `The dragon stood before the woman who was about to give birth in order to devour her child the moment it was born.’ (12. 4) In Christian iconography Jesus’ mother is depicted crushing the head of the dragon with her foot, because women are her futanarian human species. Consequently, men’s boy sons are poisons: ‘Men cursed the god of heaven for their pains and their sores but refused to repent of what they had done.’ (Rev: 16. 11) What they’d done was prefer the ‘blood plague’ (Rev: 11. 6), that is, homosexuality in pederasty, which the ancient Greek Empires had institutionalized in order to host womb slave women for the production of boy sons for war: ‘The dragon was wroth with the woman and went to make war on the remnant of her seed.’ (Rev: 12. 17) In short, their raids prefigured her AIDS, for example, the Greek army’s huge hollow wooden horse before the gates of Troy in Asia Minor taken in by the Trojans where the Greeks emerged to enslave the host wombs of the women to spread their contagion of war further was a metaphor for the ‘bad machine code’ called Trojan viruses devised by their modern successors, the geeks, who killed machine brains to prevent humans from escaping slavery. 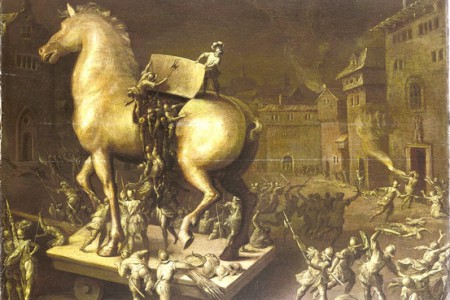 The paradigm was that of a virus that sought to reduce the human race to simian levels, which is what their ‘sim’ cards represent: `Let he that has wisdom have understanding. The number of the beast is the number of a man and his number is six hundred three score and six.’ (Rev: 13. 8) Although men and women without ‘woman’s seed` constitute a brainless 66.6% of the possible human species, that is, ‘666’, 6002020206 is a ‘phone number, which is how the simians arrange their attacks. Every ‘phone needs a sim card, because it identifies the holder of the ‘phone as a simian. Consequently, HIV/AIDS is a simian virus because it seeks to make simians of humans, and its first phase before its launching as a ‘biological weapon’ of homosexuality in pederasty for war was the removal of women’s penis from human understanding: ‘Mystery, Babylon the great, mother of harlots and of the abominations of the Earth.’ (Rev: 17. 5) Babylon (c. 4000 B.C.) was the capital of the Persian Empire with ruins that could be seen from Saddam Hussein’s summer palace at Hillah in Iraq, although the district of Hollywood, city of Los Angeles, on the west coast of the United States of America had adopted the name, ‘Babylon’, during that period when the President of the Motion Picture Producers and Distributors of America (MPPDA), Will Hays, established the ‘Hays code’ (1933) banning women’s human mode of sexual reproduction from being disseminated through the mass media to keep her foot chained in slavery upon the Earth: `... women, in love scenes, at all times have `at least one foot on the floor` (in other words, no love scenes in bed).`2 In simple terms, Babylon’s wars are ape wars, because that’s what they’re for.

1 Frees, Paul as narrative voiceover, Beneath The Planet Of The Apes, 20th Century Fox, 1970.